Study of Breeding Birds in the Grasslands of SE Arizona

This is a technique used to find nests in the proximity of where you are walking.

The birds will sit on the nest unless they feel they will be stepped on.

Swinging the cane from side to side, hitting the tall grass, triples the chance of finding a nest.

It would be impossible to do a grassland nest survey without roping.

This technique, in our case using a chain, involves stretching it between two people.

Then both people walk forward.  One person is responsible for keeping the correct tension.

The other person follows the GPS coordinates to ensure a straight line.

It is imperative that you look at the chain as you are walking to see where the bird flushes.

A sign that you are doing your job is when you trip over or walk into something.

My first impression was concern for the nest.

I assure you, it is impossible to harm the nest doing this.

The nature of how the nest is built keeps the chain a minimum of 6″ from it.

Unless you see it first hand, it is difficult to imagine how incredibly well a nest is hidden.

When flushed, you can approximate a 10′ diameter circle where the nest would be.

It took two people about 5 minutes to locate a nest.

The only reason you can see this one is that the grass was moved aside to count the residents.

When a nest is found, the GPS coordinates are recorded.

GPS is not accurate enough to find the nest itself.

The location is augmented by the use of flags, typically 2 per site, each 7 paces from the nest.

Additional notes are taken, such as compass bearing and substrate of the nest site.

There are many attributes of the nest site, including species and number of eggs or chicks.

The eggs are candled.  Eggs are translucent if a bright light is placed behind it.

You can determine the age of the egg based on what is seen, a bit like a sonogram.

Chicks are weighed unless they are within a couple of days of fledging.

Age is based on feather development.

The nest is revisited every four days.

If the nest belonged to a Cassin’s or Botteri’s, it is near impossible to ID at time of flush.

More often than not, the flushed parent lands in the tall grass.

You cannot distinguish the eggs or chicks between the two species.

As a result, when the nest is subsequently visited, a lot of extra effort is needed to ID to species.

On occasion, a fecal sack will be found in an empty nest.

Many nestlings produce poop in a sack so that mom can remove it from the nest.

After fledging, the last sack won’t be cleaned out of the nest.

A ground nest is a beautiful piece of art.

Types and densities of vegetation are noted.

A 3/8″ dowel is marked with centimeters.

Three bird counts are taken for each plot.

Each involves 10 minutes of observation within 3 hours of sunrise.

A range finder is used to measure the distance of each sighting from the plot center.

Three insect samples are taken in different directions from the plot center for 60 paces.

The samples are each placed in a Ziploc bag and kept in a freezer until it is analyzed.

Some of the birds and nests seen during my 3 day participation. 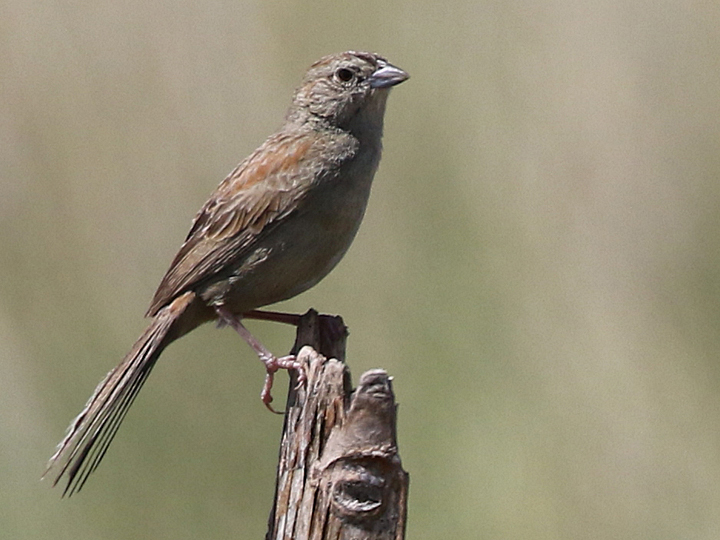 By the 1930’s, 75% of the of the southwest grasslands were degraded. Over grazing
resulted in gullies forming, accelerating water runoff, thus preventing recovery.

This sign is posted in southern Arizona, interesting justification.

Further deterioration is caused by the suppression of wildfires.

Making things worse are the invasive grass species, reducing the diversity which
mitigated the swings in weather cycles. So even this grassland is not normal.

The types of grass, percentage of wood cover, and associated density of bird nesting
is being studied. Botteri’s Sparrow was not found in Arizona between the 1890s and
the mid-20th century due to excessive grazing of livestock; now it is locally common
in its Arizona range due to recovery of vegetation (WIKI).

As little as a 10% change in wood density can impact where a bird nests.

There are limited dollars to remove trees in an attempt to restore the grasslands.
The study is attempting to determine where the limited dollars can be optimized to
save what little habitat is remaining.